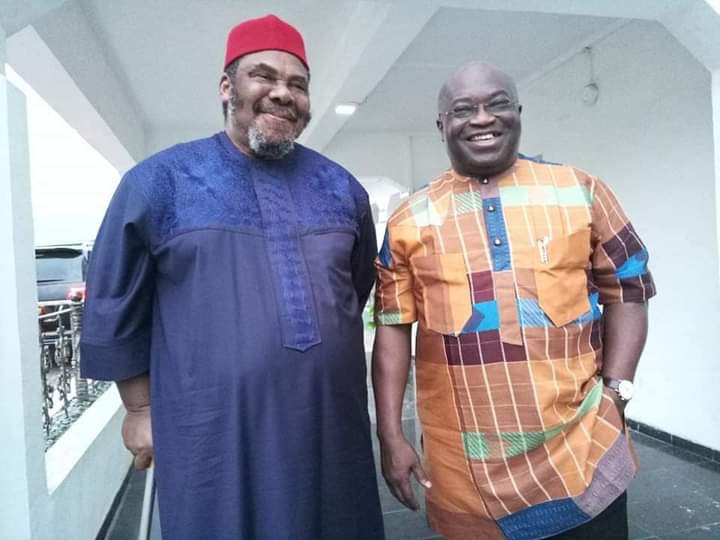 Abia state governor, Dr. Okezie Ikpeazu has felicitated with veteran Nollywood actor, Chief Pete Edochie as he clocks 74, describing him a living legend and an icon of the Nigerian movie industry.

The Governor who spoke on Sunday on the heels of the 74th birthday of the celebrated actor, stated that Pete Edochie has used the platform of movies to solidify his place as one of Nigeria’s greatest actors, using movies as a powerful instrument of social engineering, societal reorientation and cultural revival, says a congratulatory message signed and made available to ABN TV by the governor’s Chief Press Secretary, Onyebuchi Ememanka

In the words of Ikpeazu, “In the 1980s, I watched Pete Edochie for the first time in a movie. It was the adaptation of Chinua Achebe’s book, THINGS FALL APART on NTA, where he played the role of the book’s protagonist, OKONKWO. In powerfully playing that role and perfectly personifying Achebe’s Okonkwo, Pete walked himself into the mainstream of the Nigerian movie industry. Since then and till date, he has cemented his place in the First Eleven of the movie world in our country”.

“Through the various roles he has played over the years in the countless number of movies he has featured in”, , Ikpeazu continued, Pete Edochie has become a powerful symbol of social engineering and value reorientation. Above all, he has shown that it is possible to excel in any chosen profession through sheer grit, hardwork, commitment and tenacity. He has grown to become a colossus in the industry with an unmistakable commanding presence in our movies “.

The statement further added, “Governor Okezie Ikpeazu is of the view that Pete Edochie has inspired many young Nigerians to seek a career path in the movie industry, thus becoming a living spring of inspiration for many.

“The Governor, on behalf of the Government and People of wished Chief Pete Edochie a very happy 74th birthday and prays the Almighty God to grant him many more years of service to the Nigerian movie industry.”