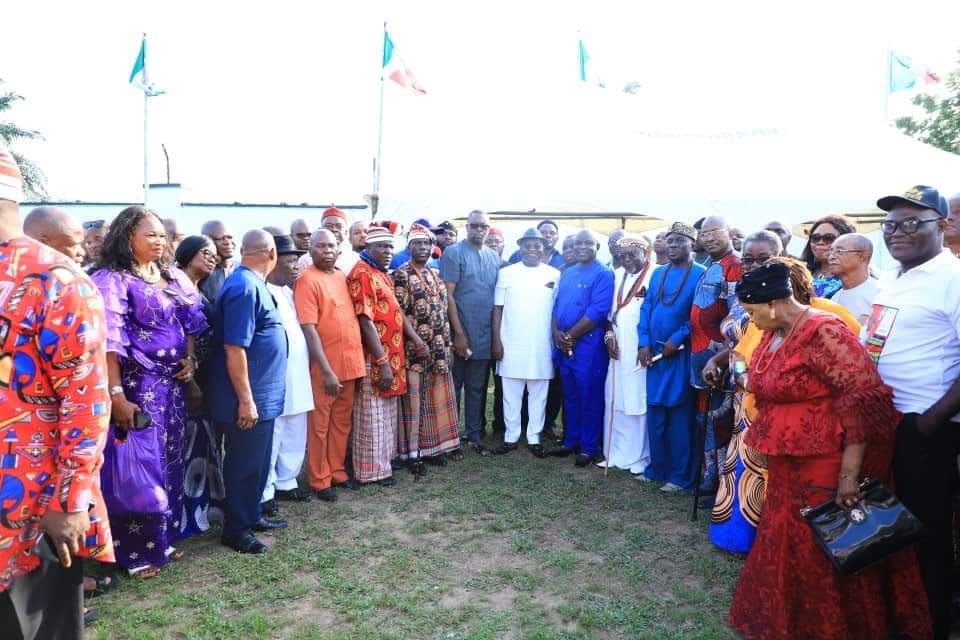 Governor Okezie Ikpeazu on Thursday met the political leadership in Ohafia South State Constituency at Governor’s Lodge in Aba where he urged them to play strategic politics and refuse to be used as an instrument to pursue mundane political interests in the State.

The governor while receiving a delegation of the leaders of Ohafia Udumeze who make up the Ohafia South State Constituency who came to pay him a solidarity visit further assured that he is committed to leaving enduring legacies in Ohafia local government area in general by ensuring the completion of Ohafia Ring Road while reminding them that he had kept his promise of appointing another Ohafia son to replace his deceased friend, Late Chief Ukpai Agwu Ukpai as Deputy Chief of Staff to the Governor

The Governor in a statement signed by his chief press secretary, Onyebuchi Ememanka also told the delegation that Ohafia land is well known to him by reason of the many close personal relationships he had built there over the years and challenged them to assert their natural leadership in the area by pursuing their own distinct political interests while refusing to be roped into a scheme that would undermine their long term interests.

He said that as the race for 2023 hots up, the people of Ohafia Udumeze will play leading roles in forging a direction that will ensure peace and stability in Abia State.

The release added, “Governor Ikpeazu used the opportunity to thank the people of Ohafia Udumeze and Ohafia LGA as a whole for their support to his administration which explains why he has ensured that the LGA enjoyed political stability, stating that he is the first Governor in the State since 1999 to have spent almost two tenures with one Deputy Governor who is a son of Ohafia LGA.

“Earlier, the leader of the delegation and current Deputy Speaker of the State House of Assembly, Rt Hon Asiforo Ifeanyi Uchendu, a former Member of the State Assembly from Ohafia South, Chief Mba Ukaha, a renowned businessman from Ohafia, Chief Udensi Ekea, a Traditional Ruler and Chairman of Ohafia Council of Ndi Eze, Eze Odum Amaogu, in their separate speeches thanked the Governor for keeping faith with their people especially by appointing two of their illustrious sons, Chief Kingsley Imaga and Comrade Chidiebere Uwagwu as Honorable Commissioners and members of the State Executive Council, as well as the appointment of their son, Chief Olugu Kalu Ugba as Deputy Chief of Staff to the Governor. They also appealed to the Governor to revisit the Ohafia Ring Road project while thanking him for approving the contract for the road to Okon Aku.

“They unanimously passed a resounding vote of confidence on the Governor and assured him of their full cooperation in the race for 2023.

“A former Member of the House of Representatives from the area, Hon. D K Uduma moved the vote of thanks at the event.

“Notable Ohafia indigenes including a former Executive Chairman of the Council, Engr. John Eke Njoku and a University don, Professor Dick Uduma and many others were part of the event.”