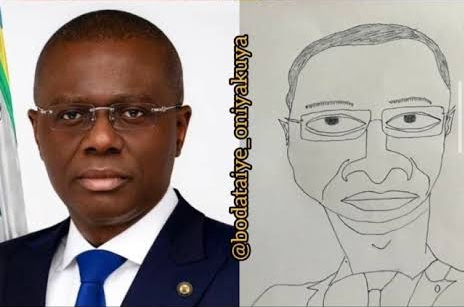 Sanwo-Olu received this in Ikeja during the Lagos Youth Symposium organised by the Lagos State Ministry of Youth and Social Development.

The symposium with the theme: ”Rebuilding for Greatness: Peaceful Conflict Resolution” was aimed at brokering reconciliation with youths in the state.

Taiwo Osinowo, a comic artist, presented the comic picture of Gov. Sanwo-Olu at the event, which he had earlier posted on his Instagram handle @bodataiye_oniyakuya, which attracted the attention of the governor.

The artist, then, threatened to show up at the governor’s office to present the humorous image.

The artist’s audacity elicited Sanwo-Olu’s response under the viral post, inviting the artist to present the funny drawing.

The governor received the drawing and rewarded the artist for his effort.

Receiving the comic art, Sanwo-Olu said that his administration would boost creativity inherent in youths of the state.

The governor said that the state government would be reviewing the secondary school curriculum to align with enhancing creativity in youths.

”It has been so remarkable that bodataiye_oniyakuya has a picture of me, that he has taken. And in front of all you 7,000 Lagosians, youths, the leaders of tomorrow, to hand over the picture to me knowing that nothing will happen to him.

”I want to tell you that we are changing the curriculum to ensure that music, song, entertainment, fashion, we begin to do it from our secondary school. And so that the likes of Taiye Oniyakuya will be an envy of the world, will be somebody that all of us will truly, really be proud of,” he said.

Visibly excited after meeting the governor, bodataiye_oniyakuya, who attended the event with his twin brother, thanked Sanwo-Olu for encouraging his talent.

He said that he received messages from his Instagram followers warning him not to honour the governor’s invitation for fear of possible arrest.

bodataiye_oniyakuya said that Sanwo-Olu’s simplicity and good-nature had changed the impression people sowed in his mind about the governor.