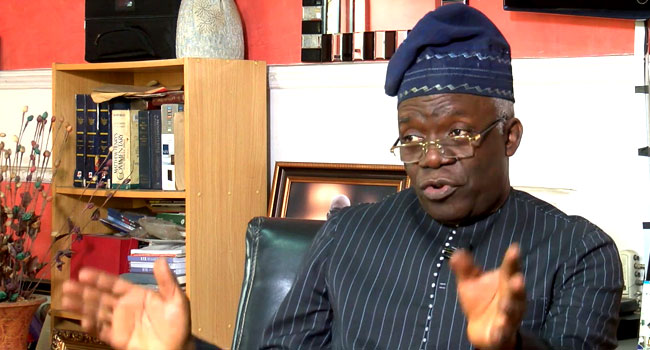 Senior Advocate of Nigeria Femi Falana says the Electoral Act 2022 has made the Independent National Electoral Commission INEC, not to be a mere bystander in party primaries but has empowered it to take action where primaries are not conducted according to the rules.

Falana was reacting to the decision taken by Resident Electoral Commissioner Mike Igini that former Minister of Niger Delta Affairs, Godswill Akpabio is not a senatorial candidate as no valid primary was conducted.

Falana said Igini was right. He cited section 84 sub 13 of the electoral act, which says “Where a political party fails to comply with the provisions of this Act in the conduct of its primaries, its candidate for election shall not be included in the election for the particular position in issue”.

According to the senior lawyer, the legal implication of the provision is that INEC cannot accept names where no primaries were conducted

Akpabio had contested the APC Presidential primaries, but announced his withdrawal at the venue following which he later sought to get his party’s ticket for the senate to represent Akwa Ibom North West

Falana also took a swipe at INEC National Commissioner, Mohammed Haruna, who was quoted as saying that “INEC has no powers to reject names sent by political parties.

“Primaries are the sole prerogatives of parties. INEC’s responsibility is merely to monitor the primaries and make sure they abide by their own regulations, the Electoral Act & the Constitution.”

Referring to Section 84 (1) of the Electoral Act which states that “A political party seeking to nominate candidates for elections under this Act shall hold primaries for aspirants to all elective positions which shall be monitored by the commission,”

Falana insisted that any primary of a political party not monitored by officials of INEC is illegal.

“INEC having sent a team of monitors across its 36 States offices and the Federal Capital Territory, to monitor the primaries, is legally obligated to check the names submitted to it and ensure they are confirmed by the various reports compiled by its officials.”

He added, “If the candidates whose names are submitted to INEC have not emerged from the primaries, the Commission will reject such names in exercise of its power under Section 84(13) of the Electoral Act 2022”.

The senior lawyer maintains that Igini’s position is not new, as it was the same position held by INEC in Zamfara State in 2018 when it declared that the APC did not conduct any valid primary, a position that was later upheld by the Supreme Court leading to the sack of all elected APC candidates from that state including the Governor

He described the latest stance by the INEC National Commissioner as surprising. “It is, therefore, most shocking to read in the social media, statements attributed to some INEC National Commissioners that to the effect that INEC is bound to accept the names of candidates who did not participate in valid party primaries. With respect, the statement that INEC does not have the power to reject names of persons submitted by political parties that did not emerge from valid primaries is grossly misleading.

“In fact, the embarrassing statement amounts to an abdication of statutory duty under the above-quoted provision of the Electoral Act aimed at sanitizing the process of nomination of candidates for national elections in Nigeria”.