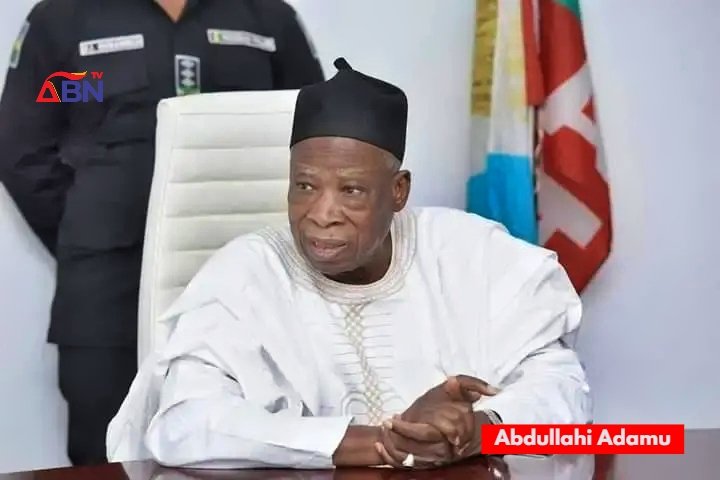 The National Chairman of the All Progressive Congress, APC, Adamu Abdullahi, on Wednesday, met with the party’s senators.

Adamu arrived at the National Assembly complex some minutes past 2 pm and moved to the office of the Senate President, Ahmed Lawan, for a brief meeting before the general meeting.

Earlier, Lawan while reading the letter signed by the Senate Deputy Majority leader, Ajayi Borofice, had announced that the meeting will take place by 2 pm at the premises.

ABN TV learnt that the number of APC senators has dropped to 62 after consistent defection from the party’s lawmakers especially those who were unable to secure return tickets to the chamber.

Two senators from Bauchi and Imo States had during the plenary resigned their membership of the All Progressives Congress and Peoples Democratic Party respectively.

Both Senators in separate letters addressed to Lawan, conveyed their decision to resign their membership of the APC and PDP, to join the Labour Party and New Nigeria Peoples Party respectively.

The APC lawmaker, Dauda Jika, in his letter said, “I hereby wish to notify you of my defection from the All Progressives Congress to the New Nigeria Peoples Party whose ideals are in line with my political aspirations.”

Onyewuchi, on his part, said, “I wish to inform Mr. President and a distinguished Senators of my defection from the Peoples Democratic Party to the Labour Party.

“This is after due consultation with my family, constituents and supporters. This will enable me to participate fully in the movement for a new Nigeria.”

Wednesday’s defection brings the number of APC Senators to 66, with members of the minority parties standing at 43.

The minority parties in the Senate are presently five in number as at Wednesday, June 22nd, 2022.

But briefing journalist after the closed-door meeting, Adamu said that the party was worried about the wave of the defection among the APC senators.

While expressing concerns, Adamu noted that though it (defection) was a usual occurrence during election period, it was normal for the party and its leaders to worry over the loss of any member.

He said, “The meeting with the senators was most fruitful. The issue of defection is an unfortunate development when it happens but this is a season where there is all sort of behaviours in the political space and ours is not an exception.

“In every election year, this kind of thing gives cause for stakeholders to sneeze and Nigeria is not an exception so is the APC, not an exception. I don’t care about what is happening in other parties, my focus is on the APC. But we all know that the occurrence is not only happening in the APC, it’s happening across other political parties too. And because we are the ruling party, our problems are exaggerated before the public.”

Adamu said he doesn’t know if the problem of defection would persist in the party but he has met with his colleagues at the National Assembly and he believes the issue is surmountable.

He added, “There is no responsible leader that would not be worried when he loses one member not to talk of two. At the moment we are faced with the stark reality of our problems. I have committed my colleagues at the National Assembly to face the problem squarely and see the problem as solvable.

“We are in politics, I don’t know what would happen tomorrow, nobody does.”