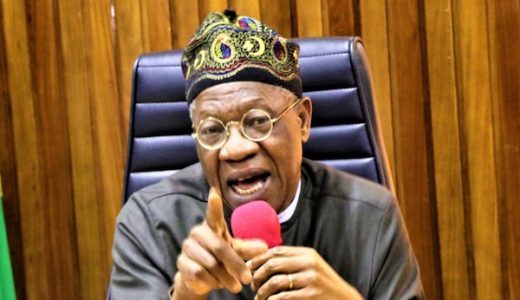 The Minister of Information and Culture, Lai Mohammed, Thursday appealed to Google to deny members of the Indigenous People of Biafra (IPOB) access to its platform.

Speaking in Abuja yesterday when a team from Google visited him, he said the “proscribed terrorist group” were using the platform for their acts of violence and destabilization.

Mohammed said Nigerians were among the most vibrant social media users in the world, with over 100 million internet users.

He, however, said those platforms were also used by unscrupulous persons or groups for subversive and nefarious activities.

The minister noted that the government recently proposed a Code of Practice for Interactive Computer Service Platforms/Internet Intermediaries” to provide a framework for collaboratively protecting Nigerian users of internet platforms.

Government Affairs and Public Policy Manager, Google, Adewolu Adene, said through the Google News Initiative Challenge, 30 media platforms, five from Nigeria, including the Dubawa fact-checking platform, would be awarded a $3.2m grant in recognition of their innovative work in information dissemination.

He said Google would work with the Ministry of Information and Culture to digitize the recently-repatriated artifacts in order to preserve and market them to a global audience through Google Arts and Culture.