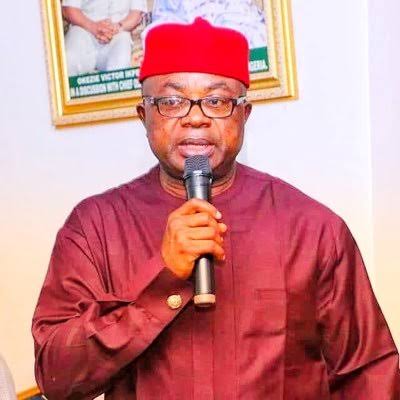 Member of the House of Representatives for Ikwuano/Umuahia federal constituency, Honourable Sam Onuigbo has said the House will soon extend its oversight function to how COVID-19 donations and grants to Nigeria were expended.

The lawmaker disclosed this to newsmen at the 22nd coronation anniversary and birthday of the Ugwu I of Ugwu Ibere, Prof. Samuel Ifenwata, at Chris Methodist Church, Inyila Ibere in Ikwuano Local Government Area of Abia.

Rep. Onuigbo however, said that the oversight was not aimed at witch-hunting anyone but to exercise the Green Chamber’s shared objectives for the progress of the country.

He said that the committee would do an oversight on all the funds the country had received since the outbreak of COVID-19 in country in 2020.

Onuigbo said that the House had not done so all these while because it allowed some of the funds to really get to the relevant insitutions, organisations and ministries, and to be applied.

“We don’t want to take any pre-emptive action. We will have to match whatever anyone says he has done with what he was given.

“We don’t intend to witch-hunt anyone but to perform our constitutional mandate for the well-being of all Nigerians,” he said.

The two-term lawmaker said that the House would give attention to the Electoral Act amendment when it returned from its Christmas and New Year break.

According to him, the act is critical to moving into the next phase of elections, which is barely a year from now.

Onuigbo said that the House would also look at how it would make laws and policies that would make life better for Nigerians.

He extolled the virtues of the traditional ruler, who, incidentally, is his father-in-law, describing him as a “honest, hardworking, transparent and intelligent man, even as he thanked God for miraculously saving his life.

ABN TV reports that Ifenwata celebrated his 22 years on the throne, his 80th birthday and the 72nd birthday of his wife, Queen Catherine Ifenwata, respectively.

The low-key celebration was also aimed at thanking God for restoring his life.

Speaking at the occasion, the royal father said that it was to show gratitude to God for His goodness and mercies upon him.

“Sometime in October 2021, I was very sick to the extent that I was put on oxygen but today, God has restored me.

“That’s why I asked my subjects and others to join me and believe in Jesus Christ, because there is no other authority that brought me back to life apart from him,” he said.