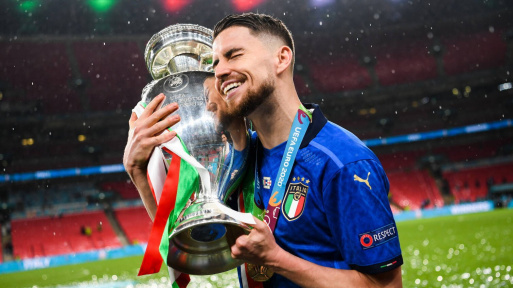 Chelsea legend Gianfranco Zola believes midfielder Jorginho would be a deserving winner of the Ballon d’Or despite Lionel Messi being touted as the favorite.

Jorginho finished the 2020-21 campaign as Chelsea’s leading Premier League scorer with seven goals, albeit each of those came from the penalty spot.

The midfielder carried that form into Euro 2020, playing every game for Italy in their successful campaign that ended with a penalty shoot-out win over England at Wembley.

The Brazilian-born player led the way in terms of interceptions at Euro 2020 with 25, substantially more than Chelsea team-mate N’Golo Kante (14), who was next best.

Meanwhile, Jorginho’s 484 successful passes were bettered only by Spain’s Aymeric Laporte (644), leading to seven chances being created for his team-mates. Only Azzurri colleague Lorenzo Insigne (40) was involved in more shot-ending sequences than his 38.

On his part  Messi, a six-time Ballon d’Or winner, finished as LaLiga’s top scorer last season with 38 goals and 12 assists across all competitions before inspiring Argentina to glory in the Copa America.

Despite Messi’s pedigree former Chelsea forward Zola – who earned 35 caps for Italy and scored 10 goals between 1991 and 1997 – backed Jorginho as a worthy challenger.

“The Ballon d’Or is usually awarded to a striker or an offensive player who can score a lot,” Zola told Stats Perform.

“Now we are talking about a fantastic player like [Lionel] Messi who did extraordinary things for the first time with his national team – and this won’t go unnoticed.

“Should they give it to Jorginho, it would be deserved. He gives concrete balance and pace to his teams. I was lucky to have him at Chelsea and I know what he does on the pitch.

“It would be deserved because not only were his performances at a high level, but the teams he played for have been outstanding. This must be taken into account.”