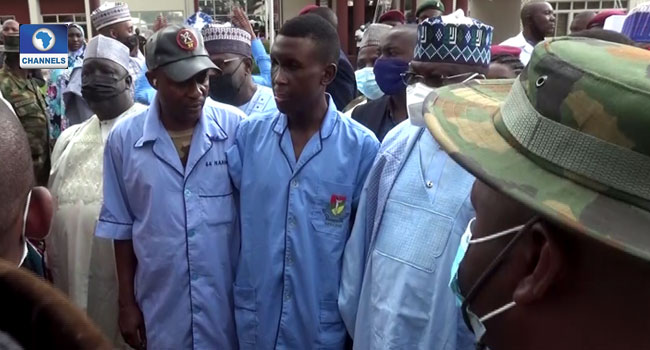 Senate President Ahmad Lawan on Saturday led principal officers of the red chamber on a visit to wounded soldiers at the 44 Nigerian Army Reference Hospital in Kaduna State.

This according to the Senate President is part of programmes to commemorate the two-year anniversary of the ninth National Assembly.

He commended the soldiers for sacrificing their lives for the integrity of their fatherland and announced the donation of N10million for the hospital.

He also assured that the National Assembly will ensure that more funds are allocated to the Armed Forces in the 2022 budget.

Over 200 soldiers have sustained various degrees of injuries at the battlefield and are currently receiving treatment at the hospital.

The soldiers sustained injuries ranging from a leg amputation, loss of sight and sound, etc, at the theatre of operation while fighting the Boko Haram insurgents in the northeast and bandits in the North West Geopolitical zone.

Briefing the lawmakers, the General officer Commanding One Mechanized Division of the Nigerian Army, Major General Danjuma Ali-Keffi and the Chief Medical Director of the 44 Army Reference Hospital, Colonel Stephen Oluchukwu said some of the wounded soldiers lost their arms, legs and sight as a result of the severe injuries they sustained in the battlefield.

They disclosed that some of the victims were responding to treatment, while many others sustained permanent injuries that have rendered them incapacitated.

The federal lawmakers joined by Governor Nasir El-Rufai of Kaduna State, went round the hospital wards where the wounded soldiers were being treated.

After the visit, the Senate President, emotionally touched by the conditions of the wounded soldiers, said the visit is to provide the lawmakers with the opportunity to appreciate people who have given their lives to protect the integrity of the country but also suffered harm in the cause of their duty.

He assured that the Legislature and the Executive will work together to ensure that the labour of the young men will not be in vain.

The Senate President also announced the donation of N10million to the hospital.