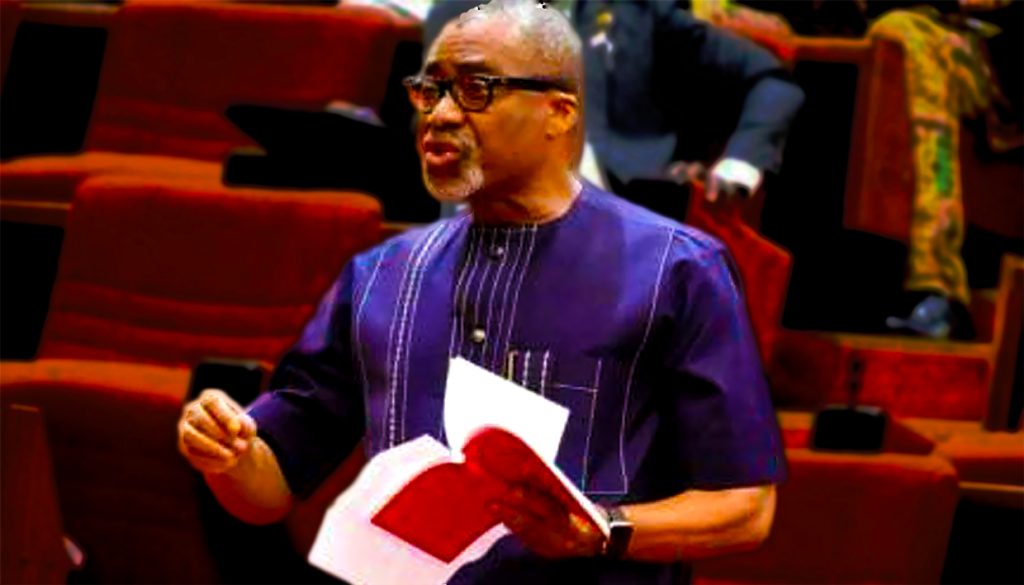 Addressing newsmen after a closed-door session, Senate Minority Leader, Senator Enyinnaya Abaribe, who read a prepared statement listed the misdeeds of the Buhari administration to include the growing spate of insecurity, poor state of the economy, and stifling of voices of dissent.

The Minority Caucus recalled the promise made by the erstwhile opposition party now ruling party before the 2015 general elections to combat insecurity and revamp the ailing economy.

The Caucus noted that six years down the line none of the promises has been redeemed.

READ ALSO: Most of The Problems Over Insecurity Are Politically Motivated – Akpabio

“The Minority Caucus of the National Assembly expresses very strong concern about the ineptitude and the inability of the APC-led government to arrest the drift to the anarchy of our nation at this time.

“This AP-led government, at inception and during campaigns prior to 2015 elections, made promises to the Nigerian public, the first of which was that they were going to deal with security challenges within their tenure.

“Sadly and most, unfortunately, from 2015 to date, rather than resolving the security situation, the APC-led federal government had rather broaden the security challenges.

“So, from the problems of the northeast, it has spread to other parts of the country. Virtually all parts of Nigeria is now beset with one security challenge or the other.

“We, therefore as a caucus, suggest that immediate steps should be taken by governments at all levels to set up proper security infrastructure whether in the mode of state police and other constitutional reforms to arrest the drift of the nation.

“The caucus also expresses strong reservations about the economic strategy of the government which has culminated into what is called quantitative easing, which the ordinary man knows as printing money.

“We feel that this strategy has led us to the very high inflation that we have today, devaluation of our Naira to the height that we never expected and has also concomitantly brought out unemployment and has led the government to contemplate, as we see today, to raise the price of fuel, electricity tariff and all manners of charges on the helpless Nigerians.

‘We think that the government should reverse itself and should not continue in its mindless borrowing without seeing any benefits that are coming from it.”

The opposition lawmakers equally accused President Buhari of indifference to the scary security situation as they noted that despite the killings across the country, President Buhari has refused to address the nation.

They further hinted that all Constitutional means were on the card to save the nation.

“The caucus has also taken note of the fact that the President is absent from duty. We have not seen our president. We have not heard from our president despite the daily killings that have turned Nigeria into a killing field of unimaginable proportions.

“Therefore, the caucus has taken note and will continue to take note of the constitutional breaches that is happening at this time by the government of the APC and will at the appropriate time utilize all constitutional methods and measures available after consultations with our colleagues to do the needful to safe the country from collapse.

“We also, as a caucus, want to put on notice to all Nigerians and the international community about the threats to the lives of our members, to those who come out to say things that are true about the state of Nigeria today, and these threats have come in various forms, including the threat to life.

“We call on the APC government that they were let and free to go around and say what they wanted, express themselves, and were able to even do a march, a demonstration led by the president himself. And so, this descent into stifling democracy was not what we envisaged when Nigerians fought for a democratic government.

“This is a time that needs the president to come out and take charge of his government and take us all away from problems we are seeing today.

“We, as a caucus, are opposed to the continued superintendent of the NIN registration by someone whom the country has lost confidence in. And we ask the government to go ahead and summon the courage to do the needful that when people lose confidence in a member of this government, that person should either quit or be fired.

“We should not lose hope in the country, but we should do everything possible to able to get rid of this APC-led government when the time for elections comes.”

After 6 Years In Govt, APC Still Doing ‘GOING TO GOING TO’ — Sen. Abaribe

We Now Have Over 40 Million Members — APC